Thinking Outside the Pod. 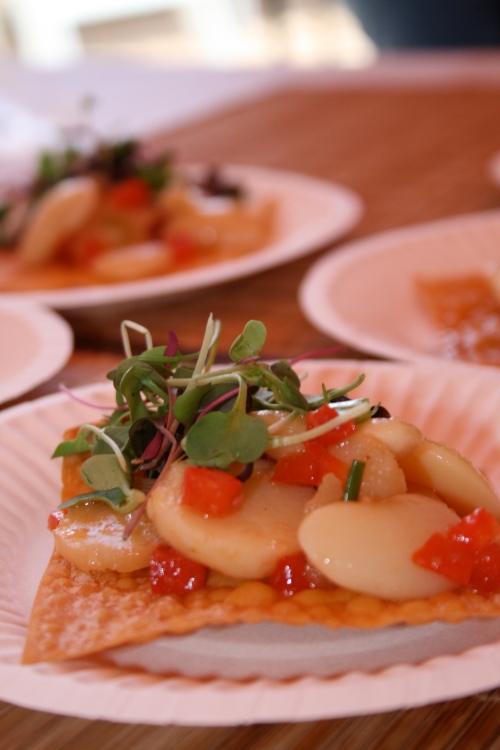 This Asian-infused lima bean appetizer prepared by the Scripps Memorial Hospital Executive Chef was one many innovative entries in this weekend's cook-off challenge at the Lima Bean Faire in Encinitas, Califorina. Photo by Christopher.

There’s nothing like lima beans to bring the community together in celebration of local heritage. Pulling into the dirt parking lot just north of the San Diego Botanical Gardens, we could see the large red and white striped tent, and a huge homemade sign listing the happenings of this weekend’s 2009 Lima Bean Faire. Seated at about two dozen round tables, local residents tasted a variety of lima bean based dishes, deciding which one would get their vote in each category of the weekend cook-off challenge.

“You want people to eat healthy, but you can’t force it down their throats,” said Scripps Hospital Executive Chef E. Dennis van Rummond. His entry into the “ethnic” category of the cook-off was an Asain infused lima bean appetizer. He marinated his beans in a blend of soy sauce, rice vinegar, sugar and crystallized ginger, and sat them next to a bite-sized salad of red bell pepper, green onion and water chesnuts, all elegantly laid across the top of a baked wonton wrapper.

While his eye-catching presentation stood out from the “savory soup” and “classic” entries, competition from local restauranteurs and community members was fierce.

On one side of Rummond was a representative of When In Rome, a well known Italian restaurant with 23 years of experience satisfying patrons. When In Rome, an affiliate of Slow Food San Diego, and winner of a local Reader’s Choice award, served their Italian marinated beans as a bruschetta imbued with a pecorino cheese.

However, the most palate satisfying, and practical lima bean innovation, was a simple and delicious hummus created at the last minute by local resident Christopher Quicker at the request of Inn of Moonlight Beach owner Ann Dunman.

“I used red, orange and yellow bell peppers and roasted them over an open flame and added them for the color,” Quicker said. The bell peppers however only made up 10 percent of the ingredients. While he used roasted garlic, olive oil, sea salt and pepper, 80 percent of his creation were pure lima beans provided by the California Lima Beans Growers Council, a legume that used to grow abundantly is this coastal area as they require no irrigation, and are a great source of protein.

Each contestant was given a 10 pound bag of dried lima beans in mid-September, allowing them ten days to perfect their entry. While the hundred-dollar grand prize, and the People’s Choice Lima Bean Trophy were enticing, participation in the event for local businesses meant free advertising and connection to the community in a family-friendly setting. A few folks played lima bean bingo, and lima bean poker while awaiting the announcement of the cook-off winner, and the children’s fashion show. 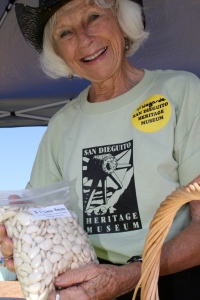 Hildegarde, a volunteer with the San Dieguito Heritage Museum, selling dried lima beans to attendees of the faire. Photo by Christopher.

Outside of the tasting tent there were several vendors of local crafts, a caricaturist, and displays of local artifacts, and old photos of Encinitas from the late 1800s and early 1900s provided by the San Dieguito Heritage Museum. Today’s festivities however were just part of the weekend long event that included a talent show the night before, and a “follies” program on Sunday including magicians, singers, jugglers and Mr. Balloon Man.

On our way out of the Lima Bean Faire, we stopped by a small booth and spoke with a woman named Hildegarde, who convinced us to buy a bag of dried lima beans for a dollar. Her enthusiasm for the event, attended mostly by people closer to her age than ours, left us feeling thankful for our community, and inspired us to try creating a lima bean dish of our own.

5 responses to “Thinking Outside the Pod.”