Nearly Half of U.S. Children Will Eat on Food Stamps. 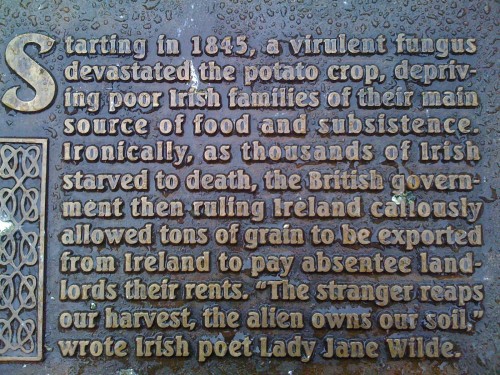 While walking the Freedom Trail in downtown Boston this week, Kerri and I stumbled across a memorial to Irish immigrants who struggled during the potato famine. Photo by Christopher.

The other day, I asked Kerri if she thought it was too late to have our publisher change something in our upcoming book. I was prompted to ask because of a recent report released by the USDA which stated that 49 million Americans (1 in 7 households) are currently in need of some type of food assistance; a number that in August hovered around 36 million. In the second part of our book we talk in depth about SNAP (supplemental nutrition assistance program), formerly known as food stamps, and as it stands now, when our book is released we will have drastically understated the scope of the problems people are facing.

Then yesterday, a shocking projection was revealed across the newswires: nearly half of all children in the United States will eat on food stamps during some part of their childhood.

The study was published earlier this month in Archives of Pediatrics and Adolescent Medicine, and was conducted by sociologists from Cornell University and Washington University in St. Louis. They based their projection on 30 years of national data, and said their results, “show U.S. kids face a substantial risk for experiencing poverty, which poses a serious threat to their health and well-being.”

The article by Lindsey Tanner of the Associated Press goes on to do a fairly good job of embracing the nuances of food security issues, but what was most surprising (and predictable?) was the comment from Robert Rector at the conservative Heritage Foundation. Apparently, Rector sees no need to sound the alarm about this issue as he explains that many in this situation, “have comforts like televisions and air conditioning receive food stamps for short periods of time when a parent is laid off.”

I cannot eat my television when I’m hungry, or get enough nutrition from cold air, and I’m assuming that the people he’s talking about can’t do so either. (The callousness of this response prompted today’s accompanying photo)

Rector’s comments seem to stem from the same place that many libertarian economic philosophers do, one of “every man for himself” and “pull yourself up by your bootstraps” rhetoric that does little to account for the contexts or the individual situations that people face. When your research is aimed from a certain philosophical gun, it’s pretty easy to hit the target you’re aiming for. The Heritage Foundation has such an arsenal, and uses it frequently on issues of social spending.

Meanwhile, local food pantries and charities keep plugging away while the need for services climbs, and resources diminish. While the work of these groups is essential, it is not enough, and on its own will never come close to getting at the roots of these problems. That being said, we would like to ask you once again to do what you can to help others, either through donating to those in extreme poverty abroad, or to those facing food insecurity in your community (or both).

While we were in Boston this past week, Kerri and I were humbled by the depth of our nation’s history, and by the efforts of those working to help others. While on the red line train we saw an ad for a Catholic charity, that asks people to throw a party where the entrance to the event is a bag of boxed and canned foods for donation. We thought it quite clever, and will most likely use this idea for our own efforts in San Diego. Thankful for your continued help of others…