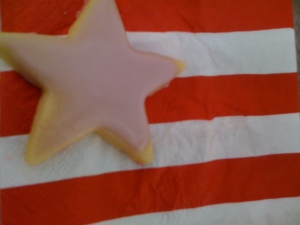 Delicious vegan sugar cookies helped us ring the bell of freedom on Independence Day, as we struggled with our addiction to sugar. Photo by Christopher.

While sitting on the lazy bike at the gym on Saturday, I glanced up from Louis Fischer’s book “Gandhi” to see Joey “Jaws” Chesnut cramming down his 68th hot dog to set a new world record and defend his title as part of Nathan’s Famous Hot Dog eating contest which has been held on July 4 for the last 94 years on Coney Island in New York City. Call it coincidence, but as I read about one man fasting to create powerful social change, another man waved a large trophy in the air, while 1.5 million people like me sat watching it on national television.

As part of our most recent experiment in eating, Kerri and I have been spending quite a lot of time at the gym, planning menus, and doing our best to eat well, but the process has been quite challenging at times. There is food everywhere, most of it is sweetened or salted to a “bliss point,” and when people get together, it’s usually over a meal. The eternal invitation to indulge is hard to resist. A couple of weeks ago I wrote about the power of vegan cupcakes during Father’s Day, but as Saturday was Independence Day the veggie dogs, potato salad, and sugar cookies at our friend Justin’s house were ready to be enjoyed en masse and pushed into the depths of my belly.

I went back to reading about Gandhi. More fasting. More political change. Then another glance up at the television. On a commercial break there was one ad proclaiming that you could “Use food to lose weight!” complete with before and after pictures. Another for a salad dressing that apparently had something to do with a man and his dog getting the paper (the sound was off). And on another television, a breeze of snack crackers danced around the screen as kids chased them into the house. Our culture is food obsessed, and utterly self conscious about our weight (rightfully so?). This duality is hard to reconcile in any meaningful way, and is exactly what I have been struggling with. At that moment in a room packed full of other people looking to be fit, it seemed comically tragic.

After the gym, I spent the morning preparing sugar cookies. This says it all.

But if that is not enough. I even made my own dyes for the frosting. A crafty endeavor stemming from a desire to not eat “chemicals,” or “artificial” food products. I think this is what literary people call irony, and our country’s attitudes toward health and eating are marinating in it. Regardless, while making the cookies I could not help but eat chunks of dough every now and then, and when they came out of the oven, it was easy to find the ones that had to be eaten (this one is a little too crisp, that one a little too broken). And so my physical exercise was easily overcome by the buttery baked biscuits of sugar.

I began to wonder what Gandhi would say about Joey “Jaws” Chesnut and an event such as this annual eating contest. I thought about my own struggle to eat well and get in shape. I wondered if it would ever really be possible to create lifestyle habits that are both bliss filled and healthy. If you have suggestions, please get in touch.

To the taste of sugar in my mouth,  the need to be fit, and a culture gone wild over it’s eats…